St Winnow, with St Nectan’s Chapel, is very proud to be a part of the Benefice of the Lostwithiel Parishes, with whom we share services, festivals and social events.

The Benefice includes the Parishes of:

Our church is open throughout the year for visitors and our worshipping community is inclusive - a warm welcome is assured to anyone who joins us.

If you are a visitor we are delighted to share in worship with you. Further information about our communities can be found in our monthly magazine The Bridge which is available from St Bartholomew’s and St Winnow Church or by request by the Benefice office.

St Winnow Parish Church is a 15th Century, Grade 1 listed building set in an area of outstanding natural beauty. The church stands on the same flat piece of land where probably the oratory of St Winnoc was erected at the end of the 7th Century. Of that building, made of cob (mud and straw) and thatched, nothing remains.

About the 12th Century a stone building was erected – the lower courses of the north wall and transept are probably of this date; in the 15th Century, about 1485, the south wall was pulled down and the aisle with the pillars and arches was put up, together with the tower. The roofs are of this date too, except for the chancel which is a Victorian restoration. There is a wonderful stillness, tranquillity and timelessness about the place which speaks of centuries of life and worship.

The tower is buttressed, leaving the corners free – unlike many Cornish churches, St Winnow has no pinnacles.Above the porch is an empty niche, where once there would have been a statue of the Saint. There is a good 15th Century foliated carving, easier to see than in the roofs which are largely original. Note also the charming verse which welcomes the visitor:‘Welcome friends, from here and there; Never mind the clothes you wear, God looks on the inward heart; Worship Him, in peace depart.’

St Winnow, or more properly St Winnoc, was one of the tireless band of Celtic priests, and evangelists who consolidated and extended the Church of Wales, Ireland, Cornwall and Brittany after the withdrawal of the Roman Legions in the 5th Century A.D.

St Winnoc probably grew up in Wales and eventually came to set up a ‘lan’ here in the late 7th Century – around 670 A.D. He died in 717 in Northern France. According to legend, when he became too infirm to rule the community he was demoted to the kitchen to grind flour. The supply of flour diminished, and the brethren complained. St Winnoc was found to be at his prayers, rather than grinding flour. The Lord said that Winnoc’s prayers were much more important than grinding flour, and obligingly sent an angel to do the work instead!

The pulpit dates from the end of the 16th Century, the feet are later, from the 19th Century. The Brass on the north wall is a modern memorial to Buller Howell, 1918.The Rood Screen is one of the few to have survived in Cornwall; it was taken down and sympathetically restored by Violet Pinwell in 1907. 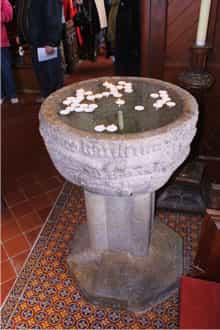 The nave part is essentially original, except for the coving. Note the carving of individual stylised flowers or leaves in the panels.The glass in the two east windows dates from about 1500 and the one in the Lady Chapel contains much information about dress of the period. Typical of the times are the deep reds and blues of the glass and a particularly rich green. The other window in the Lady Chapel is a memorial to Lieutenant Teignmouth Melvill, of Ethy, awarded one of the first posthumous V.Cs for his gallentry in the Zulu wars. There is an interesting slate memorial in the form of an anagram to William Sawle ‘I was ill am well’.The Bequest Board in the South Aisle over the Porch makes interesting reading. Such boards provide fascinating social history, even if they are in themselves unsightly.

Houses, meadows, stock and money were usually left to the Vicar and Churchwardens to use as they saw fit – a regular practice was to spend the money on bread and beef for the poor at regular intervals, particularly at Christmas.